Stunning, yet super-simple appetizer. Your guests will devour them. I call for 5 different colors here, but just yellow, orange and red will still be beautiful. Don’t be concerned about the green tomatoes – there are lovely heirloom varieties that are ripe when green (such as the Green Zebra shown in the photos accompanying this recipe) — should be easily found at a well-vendored farmers’ market. Their flavors are usually bright, sweet, and lightly tomatoey. The yellow tomato, by the way, is a Yellow Pineapple, which has red streaks throughout — it’s a beaut. (In case you’re curious, the other tomatoes used here are Jaune Flamme (orange), Costoluto Genovese (red), and Black Krim (purple).) 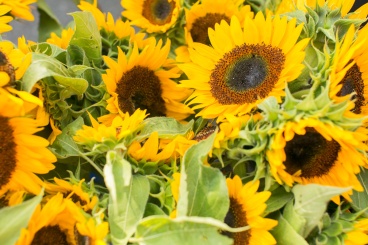